What does the surgery involve? 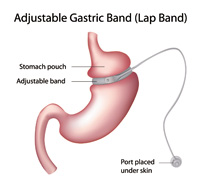 "Laparoscopic gastric band placement is technically a low risk procedure. The gastric band is introduced around the top of the stomach and locked. The band is connected to an inflation port via a connection tube. The inflation port is placed underneath the rib cage on the left hand side of the abdomen."

How does the gastric band work to produce weight loss?

"The gastric band sits at a level just below the junction of the oesophagus and the stomach. Once the gastric band has been inflated it will produce a separate, much smaller, stomach cavity above the main part of the stomach. The volume, or capacity, of the new stomach pouch is approximately the same as one mouthful of food. Once the band is working, it will force the patient to chew food very well and take time between swallowing mouthfuls of food. Once a mouthful of food has trickled from the new stomach pouch through the band, a further mouthful of food can be swallowed. If food is not chewed well it will not slip through the band very easily. If mouthfuls of food are swallowed too quickly then the food will be backed up in the oesophagus and the patient will experience quite unpleasant griping pains and occasionally will have to regurgitate the food. The video animation of the band demonstrates its mechanism of action well."

"Therefore the gastric band works by only one simple mechanism. It works by forcing a person to eat slowly by making them chew their food very well and making them take time between mouthfuls of food. In this way a small side plate volume of food should take 20-30 minutes to eat."

"My experience is that the band does not significantly change appetite in the majority of patients, however if a patient eats slightly too fast they will get the unpleasant too full feeling that occurs when food is stuck in the oesophagus. Some patients perceive this to be the feeling of decreased appetite."

How long does the procedure take?

"The gastric band is performed laparoscopically and takes less than one hour duration."

What scars will I have?

"The procedure is laparoscopic or keyhole surgery, therefore there is no big scar. The procedure involves making four small cuts ranging from 5 mm to 12 mm long in the upper abdomen just below the rib cage."

How will I feel following surgery?

"You will feel slightly bruised but be able to walk around within hours of surgery and be quite comfortable the next morning. Usually the area where the port or inflation valve is placed, below the margin of the left rib cage, is slightly more painful than the other wounds. This is normal and is usually well controlled with painkillers. "

How long will I need to stay in hospital?

"Patients can go home either the day of surgery or the morning after surgery."

How long will I need off work?

How long until I can exercise?

"You will be able to walk around within hours of surgery. The morning after surgery I would expect a patient to be able to walk around relatively comfortably. On discharge from hospital I would recommend increasing activity levels on a daily basis including longer and longer walks. More active exercise such as at the gym can be introduced one week after surgery, with a gentle reintroduction to aerobic exercise such as light jogging, cycling or swimming. Any exercise involving heavy lifting should be avoided for one month."

How soon can I reintroduce solid foods?

"Following gastric banding the restriction in the speed of eating is variable. The band is empty at the time of surgery and is adjusted about four weeks after surgery. Sometimes several band adjustments are needed in clinic before the perfect restriction is produced. We advise that patients take in liquids for one week after surgery, then introduce a puree consistency diet, followed by mashed food and then well chewed food. Following the band adjustments or tightenings, patients are requested to be careful with solid foods, particularly bread and dry meat such as chicken for several days until they know how tight the band is."

How will I know when the band is at the optimum tightness?

"The band should work by forcing a patient to eat slowly and methodically."

"The band is at the right tightness when a person can eat a whole range of foods and rarely has to avoid any type of food. A small side plate of food should be able to be consumed but will take twenty to thirty minutes. Occasionally a patient may regurgitate once or twice a month if they eat too fast. This would be the appropriate band tightness."

"The gastric band is designed to be a long term solution to weight loss and maintenance of weight loss. The appropriate tightness of the band would mean that even long term a person would have to chew their food very well and be methodical in their eating. Please see Golden Rules of Eating for advice on long term eating pattern."

"There is conflicting evidence in the scientific literature as to whether appetite really changes following gastric banding. Most of the scientific evidence which suggest that the appetite does change has an element of bias because it tends to be sponsored by the companies that market gastric bands. My own experience of patients that have had gastric banding is that appetite rarely changes. Occasionally a patient will confuse the feeling of food getting partially stuck in the lower oesophagus with a change in the appetite. This is because a patient will feel too full and slightly sick after eating too fast."

How much weight can I expect to lose following gastric banding?

"Following gastric banding a person can expect to lose about 50% of their excess weight. Therefore if they weighed 20 stone before surgery and their ideal weight should be 10 stone, they will lose half of their excess weight and their weight would therefore go down from 20 stone to 15 stone within about a year of surgery. Patients that can change their eating habits to completely avoid foods high in fat and sugar will lose more weight, and those that cannot avoid these foods will lose less weight"

What do I need to do to ensure long term weight loss?

"Patients that do very well following gastric bands are those that tended to eat too fast and eat too much food in one sitting before the band was placed."

"If a patient consumes too many foods or drinks of high calorie content that will slip through a gastric band, such as chocolate, ice cream or sweet drinks, they will be particularly disappointed with the amount of weight loss that they have achieved."

Do I need to take vitamins after surgery?

What health improvements can I expect?

"Following weight loss there will be significant improvements in diabetes, blood pressure, cholesterol, sleep apnoea and joint pains. In addition, quality of life after weight loss tends to be much better."

What are the risks of surgery?

"Following gastric band placement the short term risks during the operative periods are extremely low with only small risks from bleeding, early difficulty swallowing or blood clot in the legs. In the longer term there is a significant chance that the band can lead to complications. These would include migration of the band into the wrong place around the stomach, erosion of the band into the stomach, problems with the connection port and problems with the inflation valve. I would quote a 10-20% chance of a band having to be replaced or removed in the years after surgery." 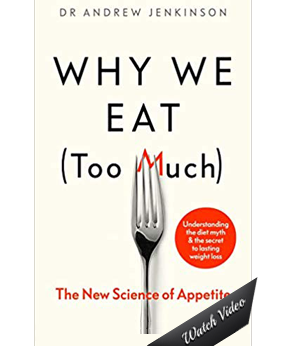